By: Sholeh Patrick is a columnist for the Hagadone News Network. Contact her at sholehjo@hotmail.com.

I found soft-spoken and highly professional Rho Zaragoza, owner of Ancient Lake Acupuncture in Hayden, a very soothing place. He's also a registered nurse, which frankly reassured me (that East-West blend again). Rho and his wife, also an R.N. who works at Kootenai Health, moved here from Portland 13 years ago. Four years earlier Rho had an "aha" moment in his career.

"I sort of looked around and asked myself, 'Is this all there is?'" he said.

Soon after, they were visiting a pregnant friend who mentioned getting acupuncture for back pain. She needed an alternative to drugs, one that didn't risk harm to the baby.

"That crystallized everything for me," said Rho. "Why does it have to be either-or? Why put the child in jeopardy or keep the mother uncomfortable?"

So he got his license and has been inserting stainless-steel needles into sleepy patients ever since. No, really; acupuncture is so relaxing, many patients fall asleep. I just get very calm and peaceful-feeling. Rho exudes that peace; he's clearly a fulfilled person.

Acupuncture is about long-term change, not the temporary cover-up a painkiller might provide. It takes a little time (varies by patient), but after seven treatments I've seen reductions in my headaches, both in frequency and duration. It can alleviate symptoms of more serious problems too; Rho also treats cancer patients, helping them endure chemotherapy more comfortably. A lovely side-effect of acupuncture is mental.

"It's about small shifts, developing a sense of pace in life, instead of rushing to the stop sign," he said. Rho sees acupuncture as part of a life picture, helping people slow down to make that shift, restore our natural rhythms. "That angst ties us up in knots."

More insurance plans now cover acupuncture, which costs less than a doctor visit. My plan doesn't, but it is HSA-qualified and a deductible medical expense.

Don't worry; practices vary, but Rho never uses the same needle twice. Sure, I was a bit scared at first. I hate needles as much as the next guy. But now I crave the treatments, because I feel so good afterward. 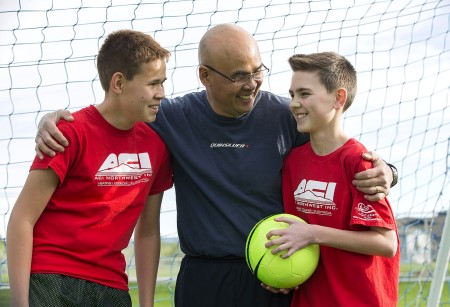 COEUR d'ALENE — When Rho Zaragoza heard soccer player Ashton Poulsen let out a sound during a scrimmage on Thursday, the coach was alarmed at what he saw.

"He had a bewildered look on his face in distress and reached for his throat," Zaragoza, a nurse and acupuncturist, said of the 13-year-old. "He was taking short, gaspy breaths, his color was blanched and his lips were purple. I knew he was in big trouble so I immediately got him to the ground."

"It was quite a juggling act," the coach said.

Zaragoza applied pressure on the lower part of Ashton's left leg and, when he didn't see the results he wanted, he applied two needles in the boy's leg.

"Acupuncture is awesome," said Zaragoza, who coaches ACI in the Coeur d'Alene Parks and Recreation League. "I always carry needles with me for moments like this. It is quick and effective."

"It could have been grave," Zaragoza said. "He was headed down that path."

Jenny was with one of her other sons nearby at the soccer fields at Skyway Elementary when Zaragoza called her.

"I panicked at first, thinking he sprained an ankle or broke a leg," she said. "The coach said he was having an episode, so I hurried over there and Ashton was lying down. By the time I got there his breathing was under control."

"The coach was very calm, knowledgeable and helpful," she said. "He was with Ashton the whole time and made sure that he was OK."

Emergency responders were called to the field to check Ashton as a precaution.

Jenny said Ashton doesn't have asthma or any other medical condition that she's aware of. She said about two and a half years ago, Ashton was playing soccer and had an episode in which he couldn't catch his breath, before he began breathing again.

"I could tell when he pushed pressure points on his legs that the coach must have known something that I didn't," Fellows said. "I didn't know that he was an acupuncturist until he started to do that. It all went really well. It definitely could've been very bad. I don't think that I'd be able to calm him down that quickly before the EMTs got there."

Zaragoza, who owns Ancient Lake Acupuncture in Hayden, said some people mistakenly believe acupuncture can be performed only on adults.

The coach described Ashton as a talented player who gives it his all.

"He plays with his full heart," Zaragoza said.